80sObscurities: Cooler Than Thou, Dig It?

So here’s some rivet head history you might find interesting, particularly for fans of Vancouver/scene bastions Skinny Puppy.

In the mid-80s, John Hood was a well-known doorman and party promoter in the apex era of New York City club life. Before he would contribute to the soundtrack of director Beth B.‘s 1987 cult classic film Salvation! – which famously also includes tracks from New Order and Cabaret Voltaire – his The Hood dance project debuted with the “Cooler Than Thou” 12″ in 1985.

A minor hit in the danceterias of the day, the track was programmed by New York (via Switzerland) producer Roli Mosimann, himself best known for his involvement in art noise project The Swans. Shortly after this release, Mosimann would also co-found the Wiseblood project with erstwhile industrialist J.G. Thirwell (Foetus).

Future involvements would include contributions to The The and That Petrol Emotion, but Molimann is also famously linked to our central characters: Skinny Puppy. The artist/engineer was initially pegged to produce the band’s notoriously difficult 1995 opus “The Process.” Unfortunately – or perhaps not, depending on your perspective – Mosimann was never able to command creative control of vocalist Ogre and the band eventually lost confidence in his ability to complete the job and he was replaced  by long-time collaborator Dave “Rave” Ogilvie. 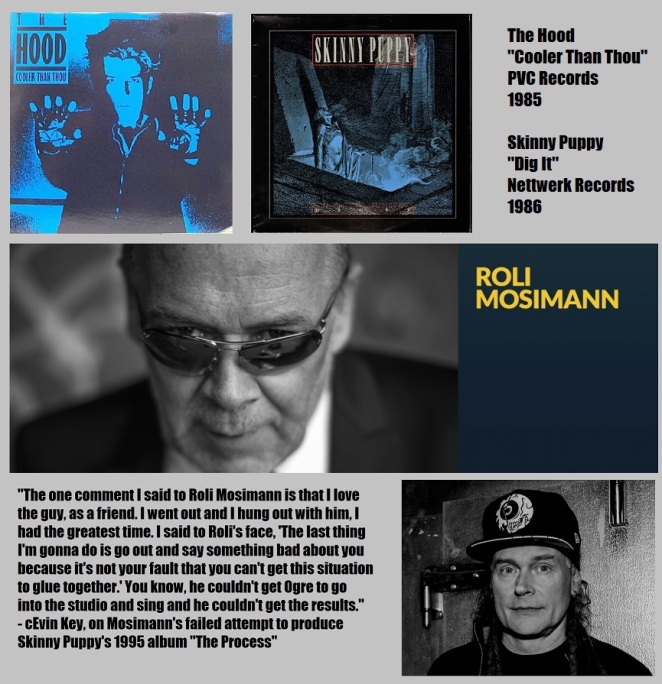 Perhaps the most interesting part of the story, however, is the striking similarity between Mosimann/The Hood’s “Cooler Than Thou” and Puppy’s popular “Dig It”, released a year apart. I’ve mixed them up for you, so you can judge for yourself.

Another instance that proves that truth is often stranger than fiction.