“You should write a book on industrial music.”

As humbled as I am by the respect and honor the suggestion implies, every time that someone recommends the idea, it’s bittersweet. I wanted to. In fact, I even started once. And so begins the story of the industrial anthology that wasn’t (and two that were).

In the days before self-publishing and the internet, a career as a professional journalist was a dramatically different proposition than it is today. This was particularly true for music writers, a scant few of which actually earned a living writing for scant fewer regular run publications: NME,  T.E.Q.?, Alternative Press…Rolling Stone.

Dave Thompson – and his writing/erstwhile partner Jo-Anne Greene (remember that name) – was one of the lucky ones, if commitment to a meager lifestyle of substantial free-lance work can be considered lucky. Thompson was not only a talented writer, he also had a penchant for darker, leftfield art and music, having written extensively on goth and post-punk over several years’ time. As such, it would be hard to argue a better or more obvious choice for Cleopatra Records label head Brian Perera to assign the task of archiving the state of industrial music for the encyclopedic Industrial Revolution, first published at the end of 1992.

Unfortunately, any attempt to encapsulate the entirety of a scene still in its earliest stages of evolution at press time is a Sisyphean effort at best. Thompson himself acknowledges as much in the book’s “Introduction”:

“…the concept of ‘influence’ in the industrial field is so ill-defined that for every artist who dreamed of Einsturzende Neubaten (sic) hitting anvils with hammers, there was another who wanted to emulate Van Der Graaf Generator and crash ships into rocks.”

Not surprisingly, criticism of the book was sharp and sudden. Some of it was fair; the book is – to be polite – editorially challenged, odd considering Thompson’s pedigree.

Critique, however, was also leveled at the constituency of the compendium itself. Some inclusions felt tangential, others arbitrary. Acts who (even then) were considered influential – if not imperative – were initially omitted: A Split Second, Klinik, Lassigue Bendthaus, Portion Control…all originally absent (whilst John Cale and Hawkwind amassed three full pages).

A valiant attempt was made to expand upon the burgeoning music scenes of Europe and the U.S. through the inclusion of two addenda to the primary work provided by rivet head culture icon, Chase (Cargo Records/Re-Constriction/If It Moves). There are a bounty of accolades I could bestow upon Chase, but in the interest of time I will credit him simply for these material improvements to Industrial Revolution; and for the equally entertaining editorial contributions he made to my staff at Interface Magazine and via his “Choking on Staples” column for Industrial Nation. (Also, thanks for that fine ReCon tattoo, pal.) 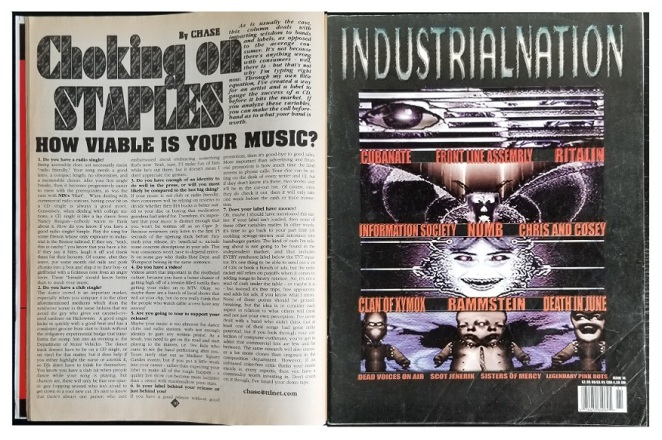 Chase’s columns always served up equal amounts of scene knowledge and humor.  His role in shaping my career in the music business cannot be overstated. Few others have ever been as likable, as smart or as humble.

To this day, the book remains a rare peak at a scene that hasn’t spent a lot of time in the sun (and, conversely, seems a lot more adept at shade). It was an honest effort, nonetheless IR left many longing for more.

I have previously told the story of the 1997 College Music Journal Music Marathon. While all CMJ’s enveloped their own highlights, this particular marathon was of import to the scene because it marked the first ever discussion panel dedicated to industrial music in the event’s history.

Enabled by the support of magazine staffer Vicky A., in September of that year I assembled a panel of experts to join me in testimony to the love and passion we held for this style of music. As moderator, I lectured on the scene’s importance, deferring to the experiences of a star cast of panelists: the Godmother of industrial music, Genesis P-Orridge (Throbbing Gristle); electronic music pioneer Wolfgang Fleur (Kraftwerk); Michelle Anderson (Anderson Publicity); and my fellow NYC DJ BENT!

As it was the publication’s first foray into the subject, no one could have anticipated the kind of turnout the event received. It was standing room only, presuming you could actually get into the room. The Virus 23 crew was constrained to the far back, so frequent call-response interchanges between myself, BENT! and V23 ping-ponged back and forth across the audience. I concede that maybe I’m colored by nostalgia, but the room felt electric. The buzz was exactly the kind of ferocious, impassioned energy characterized by the music itself. 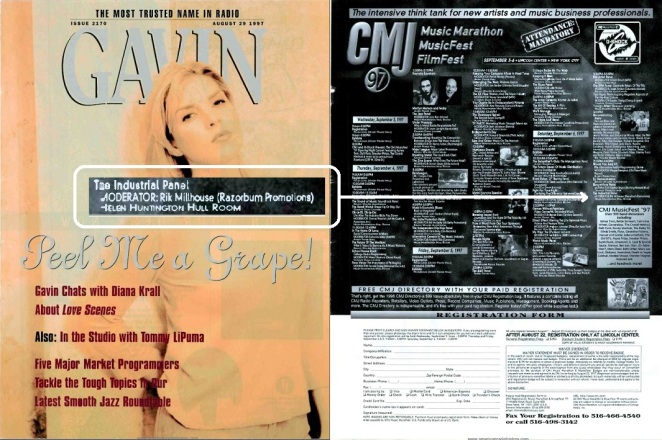 This did not go unnoticed by Billboard editor Bob Nirkind, who was in attendance.  As convention-goers filed out of the room for photo ops with Genesis and Wolfgang, Bob approached Vicky and I to congratulate us on the event. An avid music historian, Bob wanted to know whether or not the genre had ever been given any editorial treatment. We discussed Industrial Revolution briefly – its merits and shortcomings – and exchanged phone numbers (in a world before email) and a mutual interest in continuing the discussion. 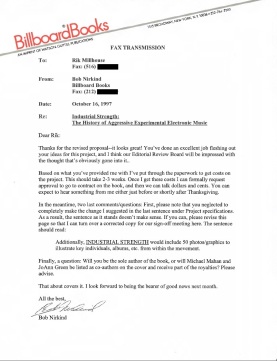 I spent the next several weeks preparing multiple drafts of both a proposal and a pitch. With the encouragement of Billboard Books, a tentative title was slated: Industrial Strength: The History of Aggressive Experimental Electronic Music. Personally, I thought it was a little wordy but Bob held the position that the broader scope might engender broader interest. From the very beginning, I feared the authenticity of broad interest in the genre. What I mean is, industrial had been maligned for so long by so many, I hedged my excitement with the recognition that things in life don’t usually go the way we’d like. (Anyone who ever doubts my credibility as a “true gothic” should re-read that last sentence.)

Bob was excited, though. “Thanks for the revised proposal – it looks great!” he wrote in a letter dated October 16, 1997. “You’ve done an excellent job fleshing out your ideas for this project, and I think our Editorial Review Board will be impressed with the thought that’s obviously gone into it.”

I have always been a fan of collaboration and giving credit where credit is due. Which explains my decision to solicit Jo-Anne Greene (that key collaborator to the Industrial Revolution book I previously asked you to remember). Women in this genre have always played a critical role and in the time since the publication of IR, Jo-Anne had become a free-lance contributor to Interface (penning a great piece on Duran Duran for a late issue).

For the prologue, I enlisted former Metropolis Records publicist Michael Mahan to add a first person perspective to the genre’s 60s and 70s era, an epoch to which I in my youth obviously could not relate. Mahan was an eccentric character and a captivating storyteller in his own right. If you’d let him, he could talk for hours about Walter/Wendy Carlos and experimental electronic music of an altogether different order.

Sadly – like many things – it wasn’t meant to be. Nirkind was excited, it’s true; but the rest of the Editorial Review Board didn’t think as highly of our idea. In the end, it was decided that industrial music was too small to commercialize and that potential profits were insufficient to justify the projected expense. So ended the dream. (Pass the tissues.)

“Man, that sucks….but couldn’t you still write that book?”

After the book deal fell through, my “told you so” attitude eclipsed any immediate desire to rekindle (no pun intended) that flame any time soon. Instead, I focused my editorial instincts on Interface Magazine. That story has been told, too, and some day I still hope to scan a few copies of it for those who never had a chance to see it.

We really strove – Andy, Dave & I – to produce the highest possible quality content: a magazine about electronic music for the electronic musician, as it were. As Managing Editor, I controlled the editorial content: who we featured and how. My musical tastes are wide, but they’re not infinite. Neither is my time nor my composition skill. In addition to Jo-Anne Greene and Chase, I had the great privilege to administer over several talented writers.

The youngest one, by some measure, was a kid by the name of Alex Reed – who must get increasingly disparaged by my continual re-telling of this story.  At the time, Alex was hosting a specialty show at a college radio station in New England. He was the only one adventurous enough to play the records that I would send to the station through my former marketing company, RazorBurn, which is how we met.

Though the discussion of our shared musical interests, it became quickly apparent that not only did Alex’s intellect far exceed his years, but his passion for the genre was easily as great as mine. I solicited his involvement as a writer for Interface; first a handful of (exceptionally well-written) reviews, then features.

There was never any doubt that Alex was meant to do great things, nor that he might lack any of the qualities intrinsic to the task. So, when Assimilate: A Critical History of Industrial Music arrived some 15 years later – Oxford Press, 2013 – it was a proverbial 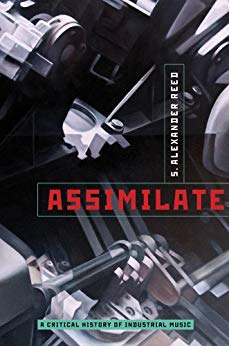 microphone drop from someone rich in both the authority and the aptitude requisite to objectively evaluate a genre centered on the principal subjectivity of art.

Could I still write a book on the genre? Sure, but I can’t be any more intellectual or eloquent and I don’t aspire to produce derivative content in the shadow of superior precedent.

As for writing about it differently, I’m just not sure what it would accomplish. I could throw shade for days about the scene or the people I’ve met in it.  Hell, I could line list all my  own greatest failures; detail every salacious moment when my ego or insecurity got the best of me. But why? Isn’t the goth scene dark enough already?

So, if you want to know about industrial music, live it. Alex’s treatise is a hell of a start, but institutional learning isn’t the sum total of life experience. You won’t find the meaning of industrial in a book. It’s not just a music genre, it’s a lifestyle. I know it sounds cliche, but that doesn’t make it not true. If you want to understand industrial you have to go deeper…to the gut…to the truth of it.